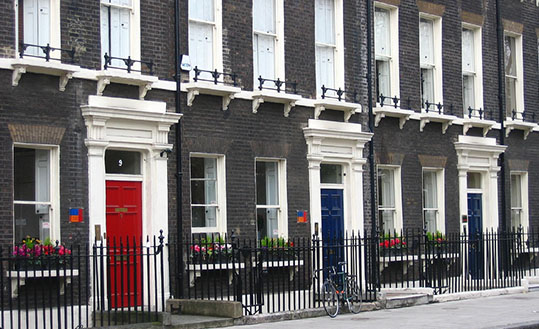 As many of our office rental properties are in Bloomsbury (including one of our own offices), we thought it’d be interesting to have a few minutes off to discover some of Bloomsbury’s curiosities.
Bloomsbury is probably most famous for its formal squares including Gordon Square which was the former home of economist John Maynard Keynes, and was where the Bloomsbury Group lived and worked. These kind of residential squares are unique to London. The first in this area was Bloomsbury Square (formerly Southampton Square) which was built in the 1660s by the fourth Earl of Southampton.
The best way to find out more about the squares is to visit them! The London Parks & Gardens Trust has published a self-guided walking tour of the area which you could spread out over a few lunchtimes.
Educational institutions abound in the area, with the Senate House, Birkbeck College, Institute of Education, SOAS, the Royal Veterinary College and University College amongst many others, including RADA and the London campuses of several American colleges.
One of the most famous visitor attractions in Bloomsbury is the British Museum where you could spend every lunchtime for weeks and still not get to see everything! If you want to learn more, it’s worth looking at their events calendar as they run free lunchtime talks on most days. Interestingly, there used to be a British Museum underground station, reputed to be haunted by the ghost of the daughter of an Egyptian Pharaoh (one of the British Museum’s residents perhaps?) who would appear and scream so loudly the noise would carry down the tunnels to adjoining stations. The station closed in 1933 – not because of spectral sightings, but because the more practical, and non-haunted Holborn station was built to replace it.
Bloomsbury is synonymous with literature and has an impressive list of resident writers including J.M. Barrie, Dorothy L. Sayers, Virginia Woolf and John Wyndham. But Bloomsbury’s most famous writer has to be Charles Dickens who, fittingly, has a museum dedicated to him at his old home in Doughty Street where he wrote some of his best known novels.
This history rich area is also home of one of the world’s most famous charities: Great Ormond Street Children’s Hospital, just off Queen’s Square. Make sure you remember it when your office is looking for its next Charity of the Year.
From the property point of view it is important to remember that Bloomsbury is a conservation area which means that the Council is obliged to maintain a policy framework that seeks to preserve or enhance its character. All this is good news, because it guarantees that the area will retain its unique personality and character for many years to come.
Contact us if you are looking for office space in Bloomsbury – it’s a delightful area to work in.